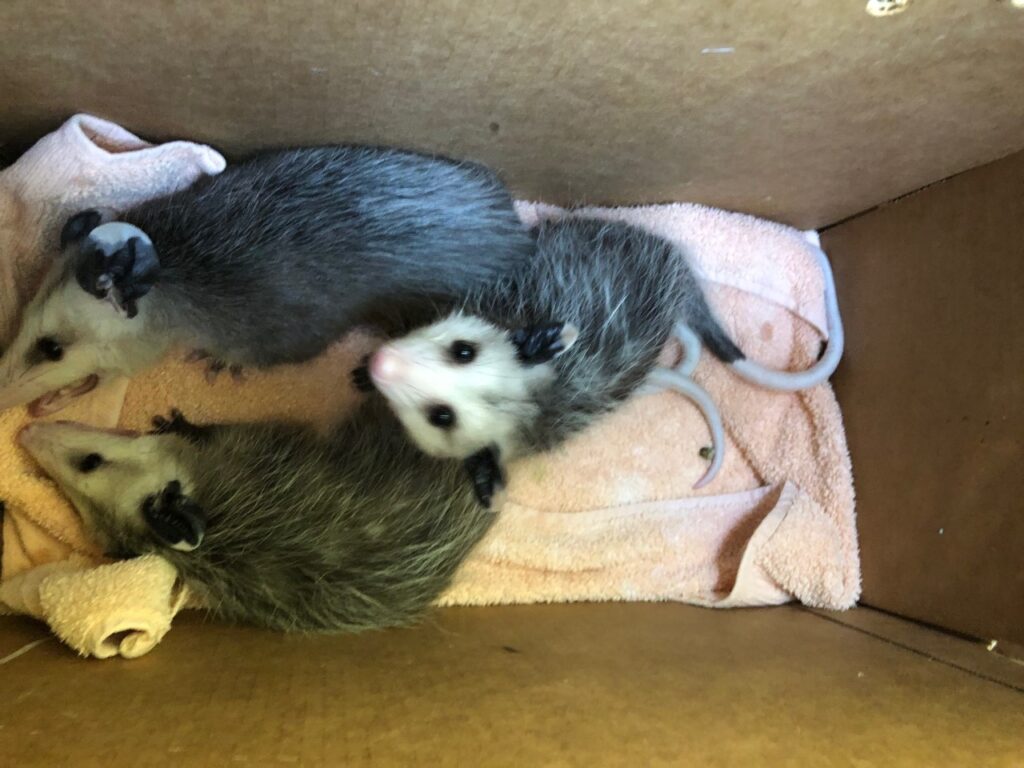 Around early March, I was having lunch with a friend on his patio up in Marin. I noticed something out of the corner of my eye, motionless and on the ground–a baby opossum! My first thought was one of sadness. The opossum looked deceased. I got up to get a better look, and the opo didn’t seem to be moving. Then I had another thought–opossums pretty much invented playing dead. Duh. Some animal professional I am!

I watched the opo closely from a distance for a few minutes and sure enough, he started trying to move away. He was alive and just playing possum! I went inside and grabbed some gloves and threw a dishtowel in the microwave for thirty seconds. I found a small cardboard box and headed back to the patio.

This little guy looked to be at an age where he would be riding on Mom’s back. Once opossums graduate from being in the pouch, they often ride on their mama’s back for a while. I suspected this kiddo fell off at some point as he didn’t appear to have any injuries aside from a small scratch on his face. While wearing gloves, I gave him a quick once-over to make sure he didn’t have any obvious injuries and then I tucked him into the box with the warm towel and closed up the box.

When interacting with wildlife, it’s really important to keep things as low stress as possible. Don’t try to feed them, and don’t try to interact with them much–it’s best to leave that to the rehabbers. Since I was in San Rafael, I knew I could call WildCare, which was just a few minutes away. From working at SFACC, I know that WildCare does some wonderful things for orphaned mammals in the community. I gave them a call, and sure enough they welcomed me to drop the opossum off.

I dropped him off, collected his ID number so I could follow up, and left. The weeks went by, and I’d all but forgotten about my chance encounter with the wee one. Until last week- WildCare called me to let me know that my little orphaned friend had grown up to be a spirited adolescent and was ready for release to the wild. And he’d made five friends! These six orphans formed their own little band of buddies, and WildCare wanted to know if I would be up for doing their release into the wild.

I was so excited! So often at work, I see things on the front end- we get in these types of animals and triage accordingly. I have sent off plenty of wildlife to rehabbers, but I never get to be a part of the end of the story. I eagerly agreed to handle the release of all six of the little buddies and made arrangements to pick them up at dusk the following day.

The folks at WildCare emphasized how to scout a good place for release and after some poking around, I found a great spot. There’s a college campus near my friend’s place in San Rafael, and it’s lush and filled with hiking trails. As the sun set, I weaved through the campus, looking for the perfect place. I found it! Down a small hill, parallel to the hiking trail was a creek bed. The creek was dry, but there were blackberry bushes, iv –so much great cover for my little opossum buddies to hide in while they got their bearings. And the vegetation looked so lush, I knew there was a water source nearby. This was my spot! Low foot traffic (I had to shimmy through some thorny blackberry bushes to access this location), well protected, away from roads, it was perfect! 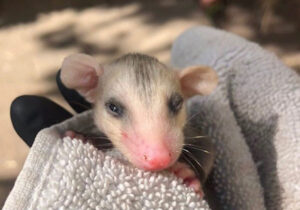 I opened the first box and all three of the opos dashed out eagerly and disappeared into the brush. I barely had time to snap a photo! The second box was a bit different–two dashed out, and I wondered about the third. I checked in the box and there he was, snuggled into the towel that WildCare had lined the box with. Oh buddy. The towel is nice but you’re no housecat!

I gingerly removed the towel and opossum and set them next to the vegetation. With some quiet cheerleading, my little straggler worked up the gumption to start exploring. He spent several minutes checking out the ivy, foraging in the dirt, and posing for the camera. Eventually he decided he was, in fact, a wild animal, and he scuttled off into the brush. 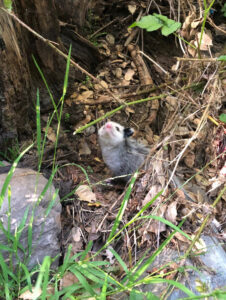 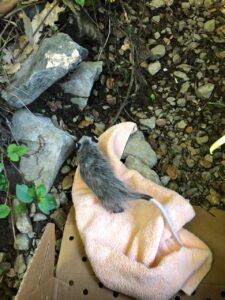 It was really a treat to be part of this aspect of animal care and not something I get to do very often. It was even cooler to get a chance to participate in this aspect of animal rescue as a civilian! It made me appreciate all that WildCare does, and I think it’s really special that they involve finders in the release of wildlife. It’s a great way to nurture the public’s interest in wildlife and helps usher in the next generation of animal advocates–a lot of kids find these baby animals and getting to do their release with their parents must be a really special experience.

So lovely to experience WildCare from a different perspective!

Fun opossum facts: newborn opossums are only about the size of a honey bee. Young opossums will stay in their mother’s pouch for around 80 days before they are mature enough to scavenge on their own. What do adult opossums eat? On the positive side, opossums eat insects (including ticks, cockroaches, snails, slugs), and can decrease the number of these pests. They are omnivores, so they’re also be attracted to pet food and compost so keep your bins closed and pet food inside! 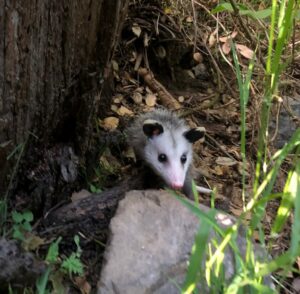 You can also call San Francisco Animal Care and Control’s emergency dispatch number: (415) 554-9400. You can bring injured or orphaned wildlife to SF ACC at 15th St. @ Harrison. Calling first is helpful, but not necessary.