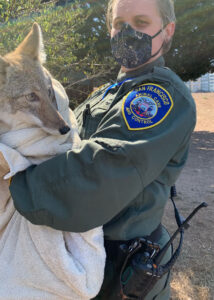 Coyotes are very visible and active during the last part of Summer and the start of Fall – known in the wildlife world as dispersal season. Pups born earlier in the Spring are venturing out and about, and adults are on the move now that the pups can be on their own. SFACC receives more sightings reports during dispersal season than during most other months. These sightings reports are reviewed by the City’s Wildlife Working Group which is made up of staff from SFACC, SF Recreation & Parks, and the Presidio Trust.

Coyote pups that end up in unfamiliar areas and get themselves in a pickle are often helped out of their predicaments by our team of Animal Control Officers. A recent rescue helped out both a coyote AND a homeowner who didn’t really want a coyote tenant. The pup got himself stuck in a backyard and was too frightened to move. The homeowner called in SFACC. Animal Control Officers rescued the pup and sent him on his way in a more appropriate area.

Along with the increase in coyote activity and sightings comes the potential for more conflict. SFACC strongly advises residents to keep cats indoors at all times. Dog should always be on leash, and guardians should remain vigilant when outside. Small dog guardians should be prepared to pick up their dog and slowly walk away if they see a coyote.

Residents who find coyotes in their yards should take a closer look and make sure that they aren’t inadvertently attracting them. SFACC has a Yard Assessment that can help residents evaluate their property and look for attractants that they may not have noticed. If coyotes are visiting a particular yard frequently, or seem to be accessing an overgrown yard or unoccupied home, call SFACC at 415-554-9400.

Feeding coyotes is always the number one problem that causes conflicts with humans. Please report anyone feeding a coyote to SFACC at 415-554-9400.

What do you do when you find a baby bird? 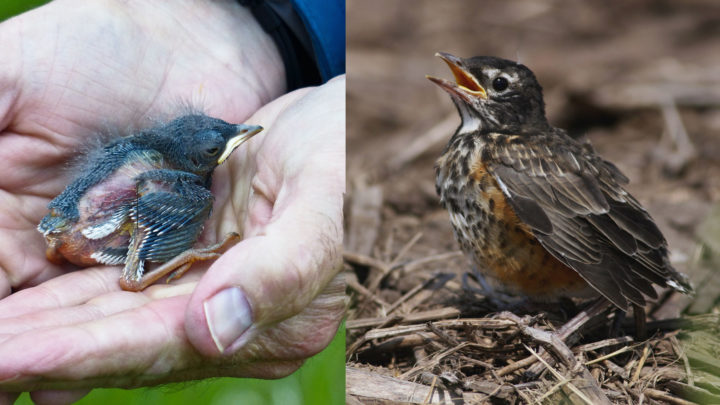 What many people don’t realize is that most of the baby birds they find on the ground are supposed to be there. Nestlings grow up and become fledglings, which have stumpy tails and are fully feathered–but cannot yet fly. If you find a fledgling hopping on the ground, don’t pick it up. This period of being on the ground is a normal and necessary part of a bird developing the skills of survival. The parents are still around, feeding them, showing them where to look for food, and hiding them under bushes. The best thing you can do is keep your dogs, cats and children away from the area for a few days. If you’ve already picked up the bird, place it back where you found it or under a nearby bush. Of course, there are times when the fledgling does need help, such as when it’s injured or in the middle of a busy street. In that case, place the bird in a small, covered box or paper bag to keep it warm, dark and quiet, and bring it to a wildlife center. Minimum contact reduces stress and increases any animal’s chances of survival.
DO NOT OFFER FOOD OR WATER.

If you find a featherless, downy, or incompletely feathered bird it will need your help. If the bird appears uninjured the best chance of survival is if it is returned to the nest. So if possible, gently return it to the nest. If you find a nest on the ground with babies or eggs, tie it back to a nearby tree. The nest can be placed in a little box or margarine tub (with drainage holes) to make it easier to secure. If the baby appears injured or the nest cannot be located, place the bird in a small, covered box lined with tissue; keep it warm, dark and quiet and try to get it to a wildlife center as soon as possible.
DO NOT OFFER FOOD OR WATER.
(Text from Peninsula Humane Society–PHS/SPCA Wildlife Care Center: 1450 Rollins Rd, Burlingame (650-340-7022)) 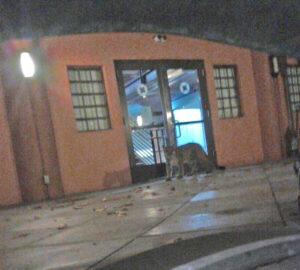 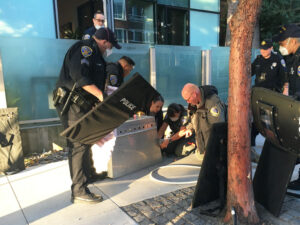 June/2020 – The lost wayward young mountain lion was safely and easily captured and then examined for health and transported to more suitable lion territory. Thanks to a great team effort led by Captain Amy Corso, Animal Control Officer Stephanie Pone, the California Department of Fish and Wildlife and the San Francisco Police Department. Read about this amazing rescue effort in this SFGATE article.

3/29/2020 – SF firefighters spotted an injured hawk downtown. With the help of some bystanders, the team comforted the bird while awaiting SFACC. Animal Control Officer Rebecca Fenson gently picked up the bird which was transported to wildlife rescue. The hawk, which had a Golden Gate Raptor Organization band, will be okay, thanks to all who came together to help. 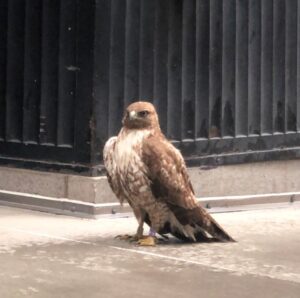 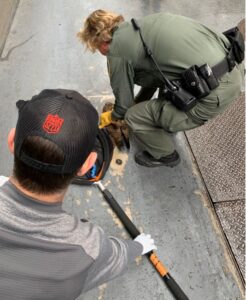 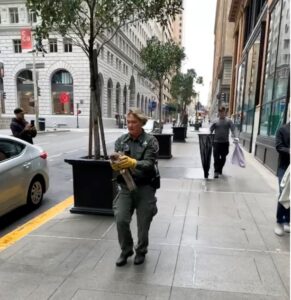 Meet Udon: the finest noodle in the city. 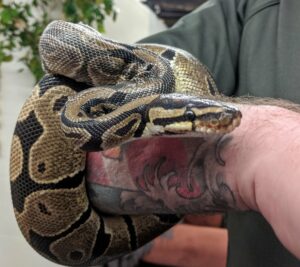 Please don’t buy glue traps. This poor lizard was found stuck to one, and would have perished in a slow, horrible way if SFACC staff hadn’t intervened. He was removed, cleaned up, and sent on his merry way. 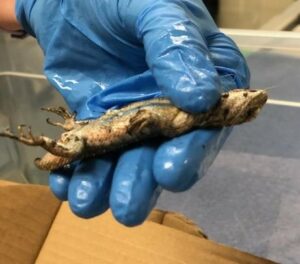 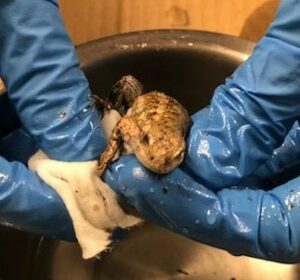 People know that raccoons are smart, but this guy (who we picked up in Nov. and thought might be dying) got out of a locked cage, that was inside another locked cage and mockingly tapped on the internal window of the van being driven at 30mph. That’s how you give an ACO the willies. 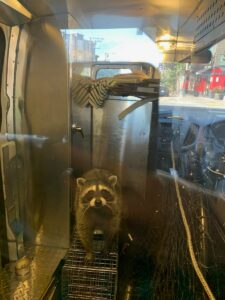 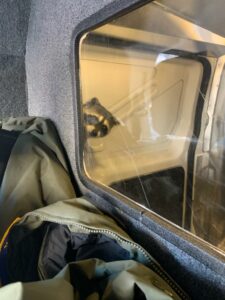 Office Edith: “He was given the all clear by the vet and released. I assume he is now working on some kind of revenge plan.”

RESCUED MARMOT! We had an unusual visitor last week (8/23): a marmot! She hitched a ride into town in a car (marmots love antifreeze and it doesn’t seem to harm them) and briefly hung out at SFACC before getting a lift back to the mountains. …Officer Edith: “It was only through the magic of Fig Newtons that we went from picture 1 to picture 2. You get to guess how that magic was harnessed.” 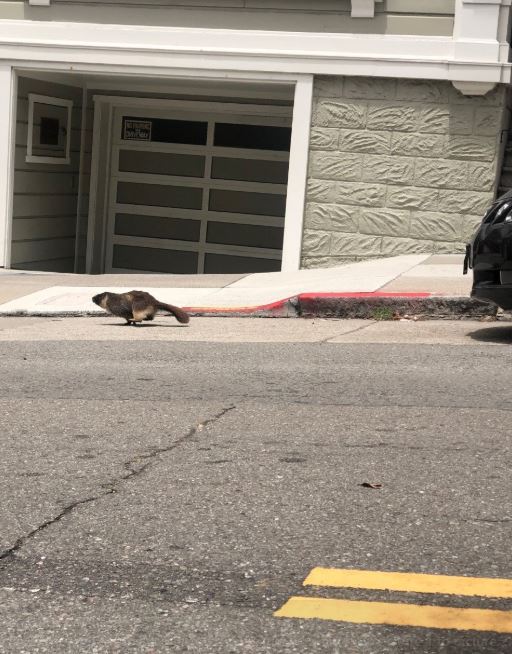 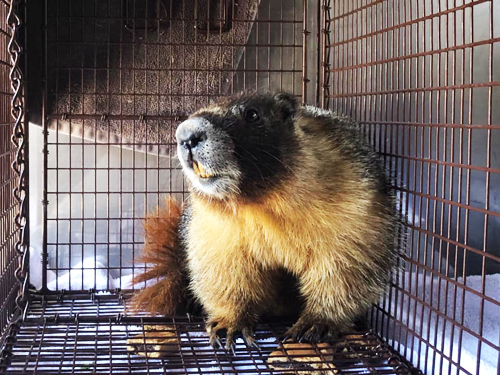 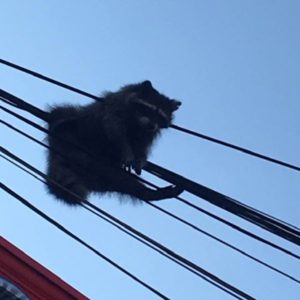 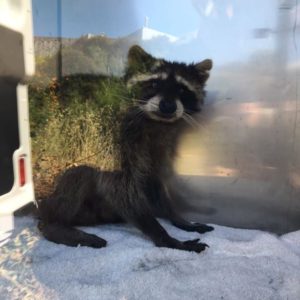 Sometimes, raccoons get stuck or injured and SFACC is there to help!  All’s well that ends well! The San Francisco Fire Department and SFACC came to the rescue of this young raccoon who got stuck during his highwire act; a Wallenda he is not… Animal Control Officer Kent took him in, checked him out, and released him back to the wild. We hope the little raccoon learned not to pursue any more thrill-seeking activities.

I found an injured or orphaned baby animal, now what?

SFACC’s partner, Wildcare, in Marin has a Living with Wildlife Hotline (415-456-SAVE) with operators answering phone calls about baby wildlife of many species. Every year hundreds of tiny featherless birds fall or are blown from their nests, or are found following an ill-timed tree trimming. Baby mammals need help when something happens to Mom, they get separated from their den, or their nest is destroyed.

So how do you know if a baby wild animal needs help? And what do you do to keep him safe until you can call SFACC or get him to WildCare? Click to find out…

Myth: Raccoons wash their food in water before eating. Fact: Raccoons dip their hands in water to get a better sensory feel of their food (their eyesight isn’t great). 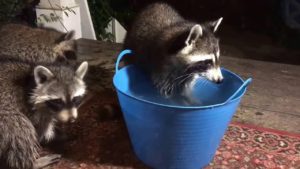 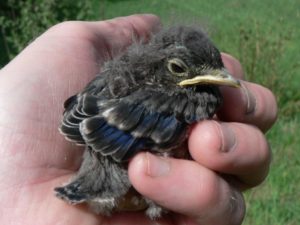 Our Animal Control Officers often pick up injured birds including pigeons, prey birds, and sea birds which are sent to rehabilitation facilities. This little bird is a falcon that was picked up in San Francisco – notice the sharp beak and talons! Fun fact: Falcons have superb eyesight and can see almost 8x more clearly than humans! Their sharp eyesight combined with their sharp beak and talons allow falcons to be fantastic hunters. Falcons typically nest on very high rooftops. Check out this nesting pair via the Peregrine cam on the U.C. Berkeley campanile.

Nearly everyone has seen squirrels burying food, but you may actually be seeing pretend burying! Squirrels have been observed “deceptive caching” which means they pretend to dig a hole and bury their nut but don’t actually put their nut in the hole. This helps to deter thieves. Pretty smart! Squirrels have great memories that allow them to later recover nuts they’ve previously buried, and any uncollected nuts turn into trees! 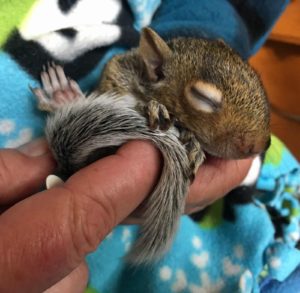 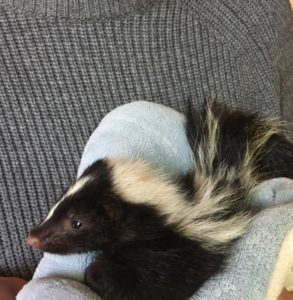 San Francisco Rescued Orphan Mammal Program is the only nonprofit rescue organization in San Francisco that helps provide care to the City’s injured and orphaned wild mammals with the goal of returning a healthy individual back to the wild for independence. Check out their website for a wealth of info, including how to determine if a baby bird or animal is orphaned and needs help at all.

If you live in the East Bay, The Yggdrasil Urban Wildlife Rescue (YUWR) and Education Center is a non-profit organization serving the SF Bay Area in California since 2001. They are dedicated to the rehabilitation of orphaned and injured wildlife living in urban city centers and education of the public about how to live harmoniously with our cities’ wildlife.

Although the annual pupping season typically begins in the spring, defensive coyote behavior towards dogs may begin earlier. Keep cats indoors and dogs on leash in areas known to have coyotes. Visit SFACC’s website to report sightings: www.sfanimalcare.org

Check out this Coyote Map showing the movements of one Presidio GPS-collared coyote in a 24-hr period. (Courtesy of the Presidio Trust). That’s a lot of movement!

A note about the Presidio Trust Coyote Research: With the assistance of urban wildlife managers and researchers across the country – including the National Park Service, United States Geological Survey, U.C. Davis, and the United States Department of Agriculture – the Presidio Trust has developed a monitoring program using modern technology to improve the management of coyotes within the Presidio. Our monitoring program began in spring 2016 and involves humanely capturing, tagging, health screening, and attaching temporary GPS collars to resident coyotes in the Presidio.

From the files of @OfficerEdith…”This gorgeous hawk has a lot of thanks to give after Officer Canez rescued her, checked her for injuries and sent her off to rehab. She’ll be terrorizing squirrels in no time (the hawk, not officer Canez, obviously).”

If you see an animal in distress, call ACC at (415) 554-9400. We’ll get them care and send them to rehab for recovery and release. If you find a baby squirrel or bird, and aren’t sure what to do, call us or SFROMP at 415-350-WILD (9453). Our San Rafael partner, Wildcare, has great tips for knowing whether an animal needs help and whether to intervene…or not.

There have been numerous sightings of coyotes around San Francisco. Many neighborhoods are experiencing a high number of observations as young coyotes disperse.

Important safety precautions:
1. Keep cats indoors.
2. Walk your dog on a 6-ft. leash.
3. Avoid areas known to have coyote activity, especially during breeding and pupping season.
4. Stick to trails and open paths. If a coyote approaches you and your dog: Pick up your dog and leave the area. Do not run.
5. Coyotes will observe and sometimes follow dogs on walks, out of curiosity, not aggression. If the coyote is too close for comfort, haze. Stomp your feet, yell, blow a whistle; anything to startle the coyote away and keep them naturally wary of humans.
6. Avoid walking your dog at sunrise and sunset hours. Coyotes are naturally active during the day, though urban coyotes usually switch to nocturnal behavior.
7. Never feed a coyote. If you are aware that someone is feeding coyotes, please call Animal Care & Control.
8. Call Animal Control @ 415-554-9400 if a coyote is being aggressive or is in distress.
9. Report observations on the SFACC website. Read More…