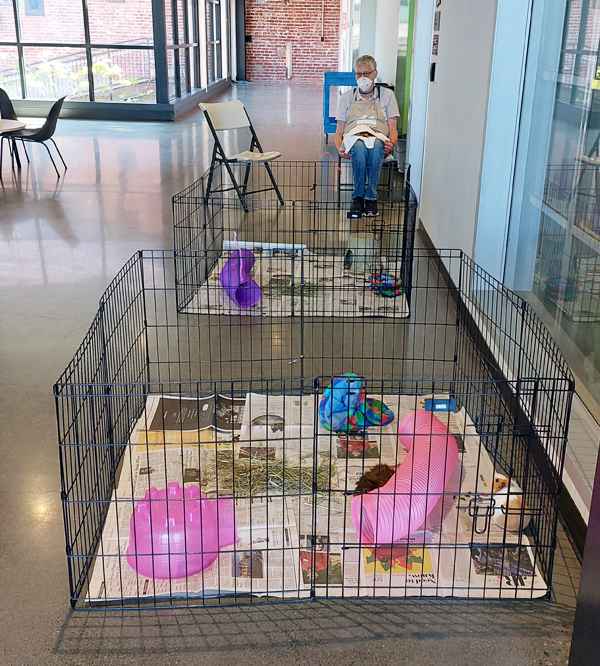 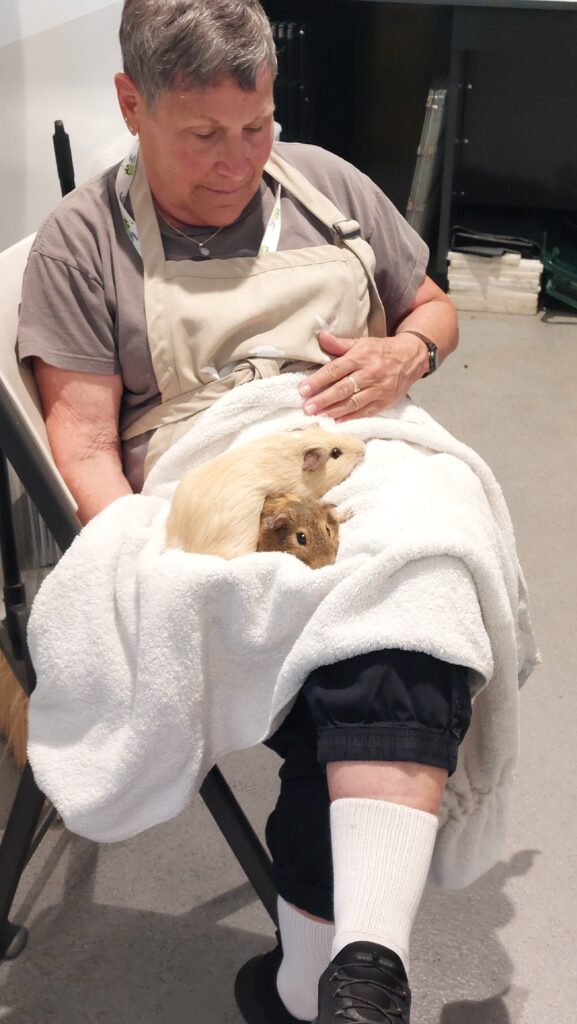 On the second floor of the shelter, you might see a volunteer in an apron holding a guinea pig in his lap and brushing it. A couple of bunnies are nibbling hay and hopping through a pink tunnel toy on the floor, in a temporary corral-style pen. Rabbits and guinea pigs of various sizes relax in their cages.

The new spacious building has three separate rooms to house small animals other than cats and dogs: one room for reptiles and amphibians, one for birds, mice, hamsters, and rats, and the largest one for rabbits and guinea pigs.  The new building is also notable for having a rooftop yard exclusively for rabbits–in the old building rabbits used the dog yard only on Thursday afternoons! Volunteers generally take two or three at a time to give them fresh air, and space to hop and play. 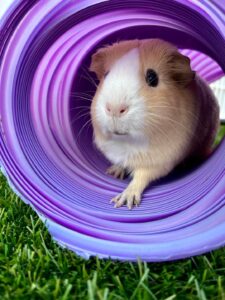 Kirby Counts, an experienced volunteer, fills me in on what happens when small animals are surrendered or found as strays. “First they go through a holding phase to allow them time to destress and be evaluated by the staff. Rabbits are generally spayed/neutered and given RHD vaccination before they’re adopted (2 shots, three weeks apart). Sometimes we take in bonded pairs and in that case, the pair must be adopted together. Rabbits and guinea pigs are individuals, and have unique personalities. They’re as resilient as cats and dogs, and can become more social when given attention and care.”

Volunteers like Kirby and his cohort on Monday afternoons, Sandy Barth, routinely handle the “smalls” at SFACC to socialize them and give them time outside of their cages. They carefully supervise animal interactions and gauge the compatibility of the animals—both for playtime at the shelter and for adopters who have other pets and are looking for a companion. The volunteers also have a wealth of knowledge about basic care and health of the animals. They often share observations with the shelter vet staff and help the animal care attendants advise adopters.

Most people are familiar with the basic needs of cats and dogs, but not everyone knows that in some ways, rabbits are more complicated. For example, bunnies have fragile digestive systems; they require specific kinds of food and hay, and chewing material to keep their teeth from becoming overgrown. 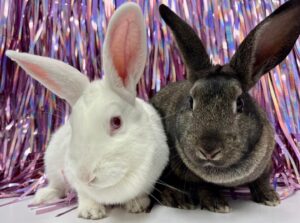 You might think of small animals as good “starter pets” for kids, but the truth is that an 8-yr-old adopting a guinea pig, rat, rabbit, or parakeet is as much a commitment for the parents as it is for the child. Luckily, the entire family receives an education from the staff animal care attendant or volunteer helping them meet their potential pet.

Sometimes people come in when one of their pets passes and they want to adopt a new friend for the remaining pet. Just as SFACC requires folks to bring in their dog if they are looking to adopt a sibling, they are encouraged to do the same for rabbits, guinea pigs, and other animals, so that experienced volunteers or staff members can observe them together. A very important point: make sure the siblings or the adopted pair are the same sex; otherwise you might have an unwelcome surprise in a few weeks!