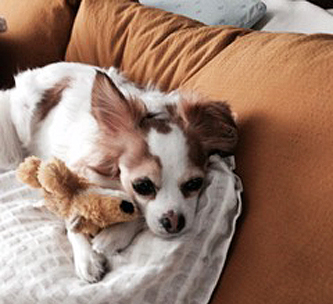 We found our Pomeranian behind a bush while house sitting for some friends years ago. She was eight months old and weighed five pounds. We located her owner, who told us the dog had been gone for two nights. A friend had given the dog to her as a gift and she never really wanted the responsibility. Long story short, she gave her to us. We named her Holly and she brought us such joy.  We were consumed with sadness when we lost her at age 16.  Six months later our depression still dominated our everyday lives. That’s when I said “That’s it, we have to get another dog.” My husband, Michael, agreed but it was late November and he thought we should wait until after the holidays. I wanted to respect his feelings, HOWEVER, I decided to look on the SFSPCA website and saw a very sweet looking dog, female and 6 years old. Perfect.

In a few days we needed to go downtown. Before driving home, I said “You know, we’re not too far from the SFSPCA.  We could make a quick stop just look at that little dog.”   Michael said, “But remember, we plan to wait until the holidays are over.”  “Sure, of course.” I said. We saw her leaning on the back wall of the glass-viewing room. Although she had two roommates who were playing, she not only kept her distance but stayed about as far away as possible from them, her head down. We asked for a visit and were put in the “ring” to wait for her. We sat on the floor and she came over, although being a bit shy and cautious. After about 15 minutes Michael looked at her then to me and said “I think we should take her.”  We both knew she was our dog.

When at the adoption desk we were told she was very shy. The woman looked at the remarks that the volunteers write after walking a dog.  She read several and each one mentioned her shyness and that she didn’t interact much. We were given information about shy dogs to take home.  I sat in the backseat with her on our way home. We drove into the garage then open the door our back yard.  She actually stood at the doorway for a little bit taking it all in, as if she was thinking “Is this for me?”  She went up to the deck, then down to the patio and across the lawn, then back to us and we went inside.

We were advised to shut the doors to each room in the house and open them one at a time for her.  We forgot to do that.  But she calmly walked into each room, then came down to the living room where we stood waiting.  She walked over to the couch, jumped on, looked at us and said…” I’ll take it.” We never saw her shyness again.  She has her favorite toys, loves to run on the beach, gets lots of good walks to many different places, and loves to sit as close to us as she can when we are on the couch.

Several months after adopting Poppy we went to San Francisco Animal Care & Control to inquire about her background. Animal Care Officers had responded to the initial rescue call and brought her to the shelter.  We were told she was left on a MUNI bus in S.F.  At the end of the line all drivers must do a walk-through, and the driver found her alone with no collar and called SFACC. They discovered she had a chip and tried several times to reach the registered owner but there was no response. Then SPCA took her to their adoption center.

She didn’t look abused and is very well trained (sit, etc.).  We feel she was with someone who loved her and who’s life must have taken a big turn.  I hope, somehow, he or she knows that Poppy is happy. She is and so are we.

Many thanks to the AC&C and the SPCA.  We are blessed to have them. 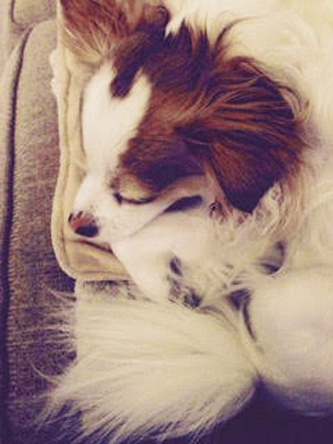 Editor’s Note: The SFSPCA and SFACC are adoption partners and in an agreement made in 1994, the SFSPCA guaranteed that it will take any adoptable dog or cat rescued in SF and hold it until it can adopt the animal into a suitable home. Read the agreement on SFACC’s website: https://www.sfanimalcare.org/about-us/agreement-sfspca-acc/