By Andrea Gremer
SFACC Volunteer and Friends Board Alum

I feel like this should start with, “Once upon a time, long, long ago…” because in many ways my entanglement with SF Animal Care & Control is one of the most unlikely stories of my life. Since I started volunteering at SFACC I’ve had six jobs and countless hobbies that I’ve picked up and dropped. My numerous dates and several ex-boyfriends might say I have a problem with commitment. I’ve never stuck with a therapist long enough to find out if they’re right.

During my first job with the City, my dog Jake passed away. We got Jake when I was 10 and he lived to be 17 years old. Without waxing too sentimental here, there’s a scene in Goodfellas where Ray Liotta’s character says something to the effect of, “When a dog you got as a kid dies, a little piece of you dies too.” That was certainly true for me, and my new coworkers noticed. Someone I worked with mentioned that her friends’ cousin’s neighbor, or someone within six degrees of Kevin Bacon, volunteered at SF Animal Care & Control and loved it and maybe that would help me be less sad.

Twelve years ago, I knew zero things about animal rescue, even less about open-admission shelters, and in general felt very skeptical about volunteering, but I went to the orientation and signed up to be trained as a dog volunteer. As a busy, young professional it was a perfect setup where I could go in whenever I had free time, get some steps in and cuddle with some furballs. I read that these things are good for your mental health and I can certainly confirm that to be true. A few years later someone recruited me to be a dog volunteer mentor and teach new volunteers how to volunteer. I know what you’re thinking, and yes some people need to be taught how to hold a leash and everyone needs to practice harnessing a wiggly six-month-old, 40-pound puppy that is just SO EXCITED TO SEE YOU!! I certainly needed help with both of those things when I started. New volunteers really run the gamut─from folks who are trying to get over their fear of dogs to people who have had dogs with significant behavior problems and had to manage them so they didn’t bite every person they met. I’ve mentored former VPs and recovering drug addicts. You never know in what corner of the world you’ll find other animal people.

As a mentor, you also get to be one of the few who are allowed to walk certain dogs. Like Calvin, a huge Mastiff that our Animal Control Officers had found hiding in a bush at a park just a few blocks from the shelter. The edges of his ears had been eaten away by mites and even after several weeks at the shelter he was still visibly underweight. He barked at anyone who walked past his kennel and had a generally scary appearance in his kennel despite being a big baby. We’d go out for walks and barely make it to a sunny spot in front of the building before he’d lay down for a belly rub. I don’t know anyone at SFACC that didn’t love Calvin, but I’m not sure he ever even had a get acquainted because of his size and loud voice. Eventually Calvin went to a rescue group to be a support animal for Veterans. 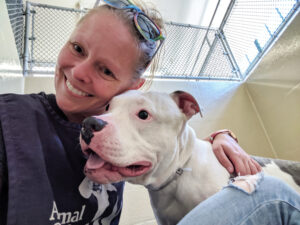 A few years after that, I offered to help out with the Friends of San Francisco Animal Care & Control (Friends), the non-profit arm that fundraises on behalf of the shelter, and found myself on the Board. Friends is a little bit of a mystery, probably because they don’t typically do things that are big and splashy. I think of Friends as a backstop: the organization that is there to make sure things don’t fall through the cracks. They pay for several part-time positions in the Behavior & Training (B&T) Department (without whom the shelter would fall to pieces, I’m fairly sure). They pay for certain medical procedures that ACC has to outsource because our mighty vet staff of two vets and two vet techs don’t have the resources to deal with them─such as amputations or temporary conditions that require 24-hour care. They also give out annual micro-grants to our rescue/adoption partners who are an absolutely invaluable resource in getting animals out of the stressful shelter environment.

Friends does incredibly important work, even if it remains mostly hidden. As a Board member and a volunteer, I was lucky to be able to see the ACC requests, but then also see the results and what a difference they make. I met some incredible people on the Board, smart, empathetic, creative problem solvers. Ironically I resigned from the Board to give myself more free time (which I probably would’ve used to walk dogs at ACC, if I’m being honest), only to find myself in a Covid lockdown three months later re-watching Game of Thrones to pass the hours.

Volunteers weren’t allowed into the shelter during the first year and a half of the pandemic. Not that it stopped me from taking a dog or two on a field trip or from stopping by to drop off cookies for friends who work there. Finally, last summer during kitten season, the vet staff put out a call for help to a group of dog volunteers. They were swamped and needed people to help out in the vet room. It was the first opportunity to start volunteering again and I pounced on it.

Unlike walking dogs where I would occasionally sit outside the shelter, on the sidewalk, in the sun, for an hour petting and cuddling with a dog, there is rarely a dull moment in the vet room. Between cleaning surgical equipment, administering meds, laundry, medical evaluations, ACOs bringing in animals in distress, ranting about the state of our healthcare system (both human and animal), getting more towels, and making sure our daily visitors get a little socialization, it is a busy room. I’ve recently learned how to draw vaccines, so I feel like now I’m basically qualified to do your kidney transplant. My favorite task though is delivering hot dog/cream cheese masterpieces filled with meds to some of our canine residents.

I might eventually walk adoptable dogs again or I might start volunteering with the unavailable dogs in our Fetch program, but ACC and I are in this for the long haul. When I think back over the last 12 years there, and what I want out of the next 12, two common threads come to mind. One is that I’m constantly learning new things at ACC. We are continually learning new things about dog behavior and B&T Dept. does an excellent job at keeping volunteers updated. I’ve learned about the health code and how the City is structured and run. I’ve learned about how to run a nonprofit organization, and how to fundraise and network. I’ve helped to give ringworm medication to guinea pigs (they look so surprised!). I’m learning about kittens and their medications, and the challenges that come with running a high-volume foster program. The second, and probably more important thread, is the people. In all my various roles, I’ve had the opportunity to interact with almost every department in the shelter. People frequently tell me that I “know everyone,” which I’m sure isn’t true because animal welfare has such a high turnover rate among staff. But I do know quite a few of “everyone” and I feel incredibly lucky to have met several of my best friends through ACC. We recently had a volunteer appreciation party and someone said, “I came for the animals, but I stayed for the people.” and I couldn’t agree more. As an introvert, I often feel like the people at ACC and on the Friends board adopted me in spite of myself.

One of the best things I ever heard an adopter say about ACC was that we really know our animals. They had shopped around at other rescues and were struck by how well we know each one of the available dogs. If they prefer playing fetch to going for a walk; if they love their stuffed elephant; if they are really excited in the kennel, but calm right down as soon as you get them outside; if they love to play in the kiddie pool, but hate the rain. We really know our animals. Because the people at ACC─staff and volunteers─all really care. The front desk will make special announcements when adopted animals come back to visit, “attention staff and volunteers, Max is in the lobby if you’d like to come say hello.” and we all flock to the first floor for a reunion.

I’ve been wracking my brain for the perfect story that encompasses ACC, but there’re honestly too many to pick just one. Calvin, obviously, but also Cloudy, Bedda, the Hurricane Irma rescues, Max, Melody, the wine puppies and the cocktail puppies, Bullwinkle, Brenda, Remus and Remy, baby Reggie, Linus, Wesley, Porkchop, Sonny (the good boy), Kiska (the model), Rufus (the goofus), Faith who had the best kennel card write up of all time, Milo (a goober), Sweet Jane, at least six Brunos and at least seven Lunas, Chester, Sara Jessica Barker, Smokey Bear, and Murphey and about five hundred others. And those are just the dogs!

I did recently stumble upon a quote that I think about sums it up, “Keep rescuing animals, you may lose your mind, but you will surely find your soul.” Twelve years ago the plan was to just volunteer until I’d gotten over the loss of my dog. Twelve years later I still look forward to my weekly shelter adventures. I can’t wait to see what comes next.

To learn about volunteering at SFACC, visit their website and complete the online form.