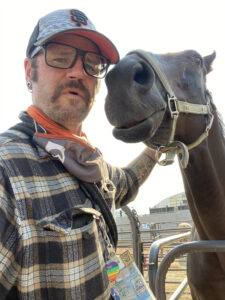 First let me say what an August! For me personally and for the California fire season.

The month started out for me on a National Outdoor Leadership School alumni course. One of three they ran this summer under the new Covid-19 protocols. It was a well instructed leadership course, with fun classes added to the amazing class room setting in the Bridger-Teton National Forest. We wore masks the whole time and had daily detailed health checks.

As I returned to my usual work as an Animal Care Attendant at SFACC, I began thinking about how this summer’s NOLS course prepared me for so many possible futures. I have also taken a Wilderness First Responder course through NOLS in the Marin headlands that provided training in basic skills for several emergency situations. I believe in being prepared for unforeseen crises, and am constantly seeking to further my knowledge and experience in assisting during such events.

On Tuesday night I watched the news about the local fires and prepared for my next day at work. Still only half unpacked from my NOLS course four days earlier, I repacked instead. As I would find out the next afternoon, it was a good choice.

Around 1600 hour (4pm), as I was preparing to go home for the evening, I got a call from Ariana Luchsinger (SFACC operations manager) and John Skeel (SFACC deputy director) about a deployment to Solano County. They had requested an animal care person with large animal experience. Before I knew it, I was home loading my gear and getting my house affairs settled. Not long after, I was heading North to the Vallejo County Fairgrounds to work at the large animal shelter.

I started life as a rural farm-child in Southeastern Ohio, and began my animal career with the Cincinnati Zoo Academy. From there I spent thirteen years with the Denver Zoo as a part of their animal staff division and emergency response team. I have had previous emergency deployment experience helping Hurricane Katrina animals transfer into Colorado through the Denver Dumb Friends League. I have previously been activated three times in my role as a SFGOV Disaster Service Worker (DSW). Twice during the Camp Fires, where I acted in both assisting and leadership roles, and once during the St. Mary’s event to set up and manage operations at the emergency shelter-with-pet. With these experiences under my belt I was ready to help! …I met my contact at 1800 hours and it was on!

As an SFGOV DSW employee, I did not have to be sworn in. So, Mark with Solano County Animal Control was able to put me right to work. There were animals arriving in trailers, animals wanting feed, and lots of volunteers in need of direction. Like a well-oiled machine Mark and I started getting all of our ducks in a row. Or goats in this case. 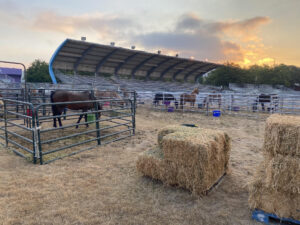 He had to step away once the Solano County Lieutenant showed up to swear in our volunteers. I set off to do feeding and the animal counts. Next thing I know it is 0300 hours (3am) and I got to nap. Ya!!

At 0500 hours it was on again! Morning rounds, volunteers showing up to help, and trucks unloading animals in need of care and shelter. We got goats, cows, llama, alpaca, chickens, ducks and horses. It was a fast, nonstop day lasting well into the night. 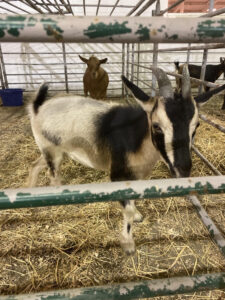 A little after 2100 hours (9pm) I was relieved and told to get some rest. I set up my cot in the barn and told my relief if anything comes in or up, just wake me; I am around corner. Five whole hours of sleep. It was so nice to wake to the sounds of the barn and the animals around me. Maybe not the two roosters. But they did tell me to get up and feed some of their neighbors. So that was just what I did.

At 0700 after morning rounds there was a debriefing. Then sending volunteers out to their daily husbandry assignments. So many goats to clean and feed… 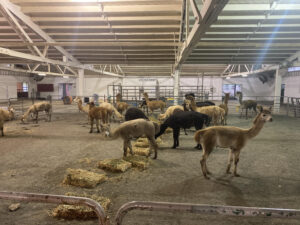 A large-animal vet came to look at our animals. The personalized plates on the farm-ready truck he drove said: MOOVET. This guy was cool, if ever cool was. He checked out the horses and the cows.But the day before, we had a herd of alpaca come in. All of them had a cough from smoke inhalation and a few had started to self-isolate due to burns. So we knew that was the project at hand. After lots of amazing animal handling, top-notch triage care was given. We got them off to Davis for the veterinary care we could not provide at our emergency shelter.

As the day went on, more trucks arrived but we had figured out a much more effective way to transfer the animals from trailer to pen. Easier on the animals and the staff—who I have not mentioned as much as I should. In this sort of event, the best in humans is revealed. The way the communities of California come together in crises like this really shows why we are the Golden State. As a team of strangers, we worked together for each other, giving the best we had to those we came to help all we could. 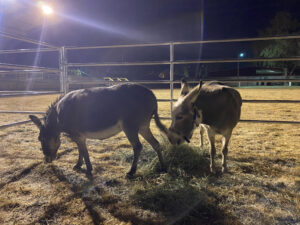 The volunteers even more so. Many had hours of training for just this kind of event, so they could offer the best of themselves. They brought food, gifts and hearts full of giving as well as trailers, knowledge, and experience. All of which was so greatly needed.

I don’t know how else to describe it–a whirlwind of a little over two days. So much to do and so much done. So many hours in a day. All I saw for the few days I was activated as an SFGOV DSW in Solano County was the best of care in every aspect.

I recommend everyone have a Ready Plan. Practice it. Know in a real emergency event that things will probably not go as planned. But it is better to be prepared and improvise if needed, then not to be prepared at all.

So elbow bumps and stay safe. 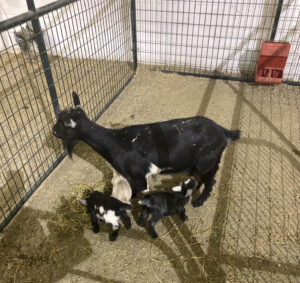 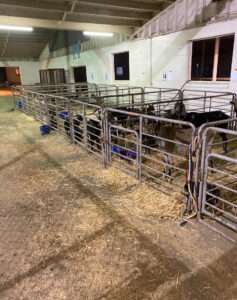