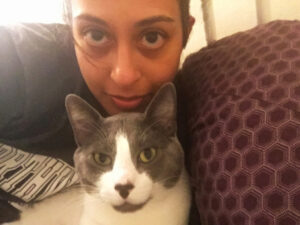 Meet Suniti Warey (with Shakespeare), a long-time cat volunteer who–like many SFACC volunteers–rose to the challenge when the pandemic closed the shelter by fostering an animal. She fostered six!

I fostered Shakespeare for almost three months. He had been returned twice and desperately needed a lucky break. He was a challenge at first. He had a strong hunting drive which led to some behavior issues until I figured out how to manage them, working closely with Daniel “DQ” Quagliozzi (SFACC’s Cat Behavior Consultant), who was very helpful.  Though Shakespeare demanded a lot of tailored interaction to help get his energy out, he did settle down and became a sweet and loving chonk. I was so thrilled for him when he finally found his adopter, seemingly a perfect match. 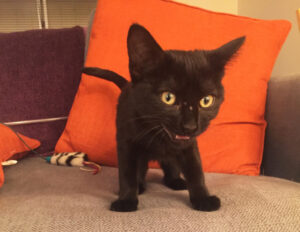 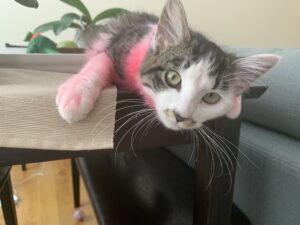 My next foster was an adorable little black kitten, Pipette. She was a bit shy and overwhelmed when I first brought her home, but soon acclimated. She grew up so quickly into an energetic, hilarious cuddle bug and was soon adopted. It was hard to see her off, as she had provided quite a lot of entertainment during the pandemically uneventful summer.

Flamingo was kitty number three, who was with me very briefly and went off to her new family after enchanting visitors with her adorably playful nature. 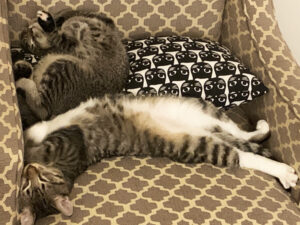 My next fosters were the undersocialized pair Bonnie and Clyde who took a couple weeks to warm up but ultimately were the most charming and fun duo. Clyde especially couldn’t get enough affection; they were the happiest and funniest little characters. They were overlooked by adopters for a while but eventually found their perfect forever home. We’ve received some updates from their new family and it fills my heart with joy to know they are so loved. 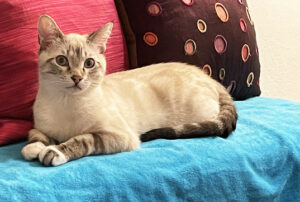 Denver Max (Maxy) was my most recent foster, and he was quite a project. Extremely under socialized and fearful–it took me almost a month to earn his trust. He learned to love being petted and snuggled, and could play forever! He remained nervous around people and found a wonderfully patient adopter to continue to work with him. He also has a brother to show him the ropes!

During the pandemic, fostering provided me with a continued connection to SFACC, where I’d been volunteering for six years. I sorely missed the interactions with staff and fellow volunteers as the pandemic dragged on, and of course I missed visiting the rotating lineup of furballs and getting to know these little souls for the brief time they were at the shelter. I always hoped that I brought something positive to their lives before they could find their adoptive family. Fostering was a great way for me to keep this going. Of course, looking forward to playing and cuddling with my fosters after a long day of work was a bright spot in the otherwise isolating times. 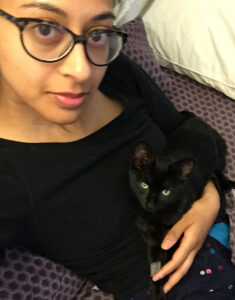 Fostering During the Pandemic